The Andaman Islands are floating in splendid isolation some 400 nautical miles north-west from Phuket in the Andaman Sea is this archipelago of over 500 islands, islets, rocks and reefs. They stretch out over a length of 430 miles and are an unparalleled destination for nature lovers and divers alike.

Geologically speaking the islands were once part of a mountain range stretching roughly from what is now Burma to Sumatra.Tectonic movements caused the larger part of these mountains to sink below sea level, what remained above the water are now the

The Andaman Islands and their people 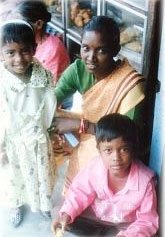 The climate is somewhat cooler than Thailand or Burma, the sea breeze further reduce the temperature. You may actually find a need for a jacket in the mornings.

The aboriginal peoples on the Andaman and Nicobar islands are of Negroid and Mongoloid stocks. The main tribes are the Onge, Andamanese, Shompen, Nicobarese and Jarawa Sentinelese.

Languages spoken are Hindi, Tamil, Bengali, tribal languages and English.The number of tribes is sadly dwindling fast, although the Indian government makes an admirable effort to protect their area’s and culture.

There are many historical sites to visit around Port Blair dating back to the times of British rule.

Wildlife of the Andaman

Above water the Andaman are a veritable Garden of Eden and a naturalists haven. The rainforests are a habitat to a vast number of plant-, bird-, and animal species, many of them unique in the world.

The canopied forests themselves have an amazing variety of timbers, foliage and blooms.The Andaman Paduk, the Yellow Hibiscus, the White Lily, the Pandanus as well as many varieties of Orchids are but a few of the over 700 species of plants to be found.

Flocks of parrots, Bahminy kites, hornbills, sea eagles, and herons will delight the birdwatcher. Around sunrise one can often sight spotted deer along the shores.

Another unusual sight is the swimming elephants. After a day’s work the mahouts (elephant trainers) take their pachyderms for a refreshing swim. The elephants can actually swim under water using their trunks as a snorkel!

Diving in the Andaman 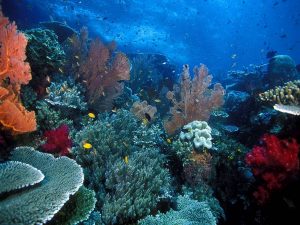 The most striking feature and the big attraction of diving in the Andaman is the sheer number and variety of fish one can encounter. The diving is for this reason world class.

Because of the almost total absence of commercial fishing and industrial pollution the marine life is extraordinary healthy.

One can almost lose orientation whilst swimming in vast schools of snappers or jacks. Other species one routinely encounters are mantas, tunas, grey reef and silvertip sharks as well as turtles, dolphins and occasionally whalesharks. Reef fish and smaller life are also abundant. Excellent corals are to be found throughout the area offering opportunity for divers and snorkellers alike. Visibility you can expect to be in the 20 m+ range. You will always have the dive sites to yourself as there are virtually no dive boats in the entire area.

Some of the offshore sites such as Narcondam are generally not to be recommended for the beginning diver, this due to strong currents and sometimes large swell. The inshore sites are generally suited both for beginners and more advanced divers. Permits may be required for some destinations. New divesites and splendid anchorages are continuously being discovered and explored, lending a unique expeditionary feel to these trips.